Engraving refers to the incision of a particular design on a material. It can be done for a variety of reasons, including labelling, decorating, or for security purposes. Engraving is among the oldest printmaking methods. Nowadays, there are different methods of engraving, which form the basis of the engraving services offered. Below are the top four product engraving services.

Etching is commonly used to create engravings on stone, glass, and crystals. This type of engraving can be used to mark out graphics, logos, and letters on things such as vases, bottles, and various decorative pieces. The traditional methods of etching involved the use of a strong acid, which was commonly done on metals. Nowadays, a variety of chemicals are used instead of acid, depending on the material to be engraved.

This method of engraving is commonly used on metals such as aluminium, copper, silver, and gold. It is generally used to cut out logos and letters on trophies, plates, knives, and various decorative pieces made of metal. A spinning cutter is used to cut through the metal material to make the engraving. This type of engraving is popular because it can be used for a wide variety of metals.

Laser engraving can be used on various materials such as stone, metal, wood, and leather. One of the top benefits of laser engraving is that it is often flawless. That is because it is possible to control factors such as depth and width accurately. The process entails the use of light beams to make the engraving. 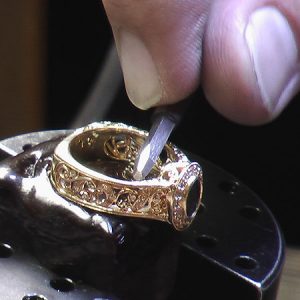 Hand engraving is the most difficult form of engraving, and the oldest as well. It involves a skilled artisan using a variety of tools to make the engravings on a material. This form of engraving is still popular because of the old-world charm and value of craftsmanship that it adds to products.